"Above the grey rock bivy site was the worst of the trenching and with all seriousness I made a trench so high, or I guess deep, that I could not reach the top with my arm fully extended with a tool in my hand. I was forced to climb out of the trench after about two hrs of wet sugary leading. All in all it was a great learning experience."

Realize I made the post first and after Daniel read it he asked me to add some of his Alaska experience to drive home the point. So nothing here is critizing Daniel. We both hope the info offered will simply help someone else avoid similar
mistakes.

Before we get into the gear details you first need to understand the climb and conditions Harro and Willaims had in Alaska in the spring of '10. Record amounts of new snow and terrible ice conditions were common through out the range last spring.

Their climb on Peak 11,300 is a great testament to the team's tenacity and endurance. I've climbed with Daniel and know how strong he is. In the past a xc racer at a national level if that gives you any idea. Wallowing in chest deep snow for hours on end is mindless and dangerous. The level of physical labor involved has to be experienced to be believed.

Harro and Willaims spent 3 nights and 3 and 1/2 full days climbing to get up Peak 11,300. The guide book says "1 to 3 days, Alaskan Grade V 5.8 60 degree ice and extensive cornicing. " The next party to summit 11,300 after Harro' team did it following their pre built trench and tent platforms in 40 hrs with a short bivy mid route.

Take a look at the "pre built trench" in the video to get an idea of just how miserable the route was in that condition.

Back to the gear.

The Marmot bags they carried on route were stuffed into the issued Marmot water proof stuff sacks that came with the bags. The frozen bag in the picture was a bag pulled out of that stuff sack in "block form" frozen solid. 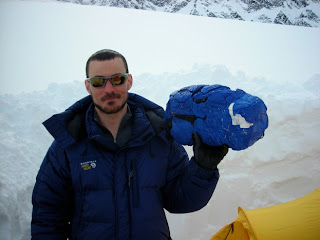 Three major reasons the bags got this wet.

#1 They were in severe storms 3 full nights...which is unusual conditions to be on route and still moving. They were opening the tent door every time to get snow to melt. Doing so enveloped the inside of the tent in spindrift every time the zipper came down. It would have been better to fill a stuff sack full of snow once, for the entire night's cooking chores. Using dedicated pee bottles would help as well. Keeping the tent fully zipped up would also keep the tent environment drier by allowing the heat generated with the stove and bodies to drive the moisture in the air through the single wall of the tent.

#2 Their gaiters were water- proof shorties on top of good double boots. The moisture generated in such nasty snow conditions didn't allow the heat to push moisture out of the boots and into the pants to add body heat and help dry both boot and pant. Instead the gaiter stopped any moisture from their feet at the ankles and froze there. Then it later melted in the sleeping bag and obviously soaked the foot section of the unprotected down bag. No high tech outer material is going to protect you from moisure you bring into the bag.

#3 Poor choice in clothing. Both climbers used Gore-Tex shelled jackets. Good choice but they could have done even better. Both climbers used soft shell pants. Not the best choice for the conditions. During a typical year in decent conditions that combo would have worked fine in Alaska. In 20/20 hind sight, and from my computer desk, plowing through 6 or 7 feet of snow for 3 days running it was the wrong system. A super light single inner layer for insulation (wool for a reason) and super light set of bibs and a jacket in Gore-Tex or Event would have solved much of the moisture problem in the tent even with their simple down bags. Ditching the additional gaiter and using a pant gaiter and elastic loop would have done much of the rest.

They summited...so hard to argue with their results.

For those that asked...I would have used a down bag on this climb myself. And Daniel is taking another down bag to Alaska again this spring for an even bigger project. I used a synthetic bag on my 1st two trips to the Alaska range. The last 6 I have used down and will continue to use down in Alaska and most everywhere else I climb.

I don't know anyone who climbs seriously that doesn't use a down bag the majority of time. Down is the lightest insulation available for the amount of volume they offer. And just as importantly they stuff the smallest.

But if this post tells you anything, even seemingly tiny decisions, like the wrong choice in a pair of gaiters, can lead to major issues.

In this case, again, it is the Indian and not the arrow.

The good things? Both climbers used the Arcteryx Duelly belay parka on route. That jacket and their personal limits of suffering is what enabled them to summit and get back down with no cold injuries. Daniel's comment on the Duelly? "The single best piece of gear we took to Alaska". But then it is not the normal synthetic jacket either and is more comparable in thickness and warmth to the very best of the down jackets available and still lighter than most.   But most importantly it is not effected by moisture inside or out.  They also both used La Sportiva dbl boots, Spantik and Baruntse which was a part of the equation as well. (more on that comparison tomorrow in a new inner boot post)

The down Mtn Hardware jacket in the picture is a "base camp only" item they both took to use around camp and for cooking. They never intended it or used it for climbing.

Thanks to Daniel for telling "the rest of the story". And thanks to readers for asking the questions through the blog.
Posted by Dane at 5:19 PM