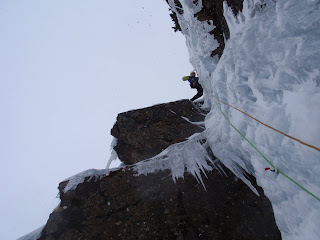 "Ratings can be all over the map on this one, WI 5R, M5, 3 to 5 pitches can be had, or it can be WI6-R and no M rating or if you are lucky casual WI4 and no rock. It is a water ice climb in an alpine environment so it is all about conditions. Today they were good."

A few years ago a buddy of mine was telling me how his ridiculously hard first ascent of a mixed alpine line, had now been down graded, without ever have been repeated. Part of it he blamed on the French. Part of the discussion, and his real point, I failed to fully understand at the time.

The French climbers who had recently repeated the route, did so in conditions the first ascent party only dreamed of. The Anglo/Saxon team had hard mixed, dry tooling, little pro and less ice. The French had neve' inches thick and yards wide, a tiny bit of mixed in comparison and climbed the majority of the same line as a pure ice climb with single swing, bomber sticks.

The two teams on the same stellar line obviously did not have the "same" experience.


So my friend was right. "His" climb has yet to be repeated. But that has always been the nature of alpine climbing and even more so with the most modern alpine mixed routes.

Before modern ice gear, the greatest alpine ice routes were generally only climbed when they were perfect snow or neve'. Anything that showed bare ice was considered too dry and out of condition. Now we search out those dry "real ice" conditions and quickly front point through easy alpine neve'.

Ice runnels that offer stellar M climbs are there and climbable one day and gone the next in the Cascades or Alps. Good example was a line I climbed last winter following a party from the previous day. Then two days later that runnel was bare rock and the ice gone. Subsequent parties that winter by passed the crux (because it simply was no longer there) of "our" route by climbing easy snow well right of our original line. Discussion of the route between a dozen of us who had been there left us wondering just what "climb" we were actually on?! M5 or easy snow? You wouldn't think that would be much a discussion. But it took pictures taken during "our" climbs actually showing "our" conditions to sort it all out.

What have learned from all this? Climb when you can, enjoy what the conditions are while you are there and then forget about it :-) 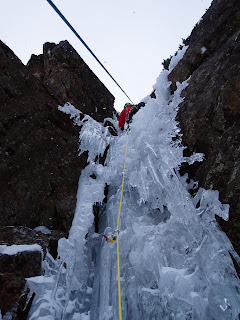 The two pictures are the same climb almost exactly a year to date ('09/'10) separated in time. The pitch you are looking up in both pictures is a over-hanging rock corner, and typically fills in with ice formed from melt water coming down from high on the peak. Enough ice generally to climb as a WI5 to WI6- with an R rating. How over-hanging the climbing is depends on how much ice has formed. It can build enough ice to be a WI4- route. The initial quote at the beginning of this blog and the photos are from the classic Cascade ice route on Snoqualmie Pass, "Flow Reversal". 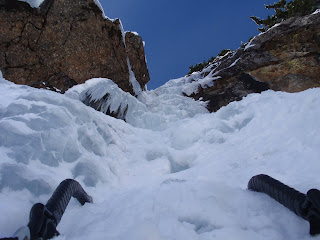 My peference for any WI6R route? Wait till it is FAT!
Late spring WI4 condition.

And another photo of the same line a few years previous. Roger Strong photo 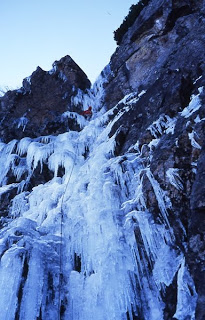