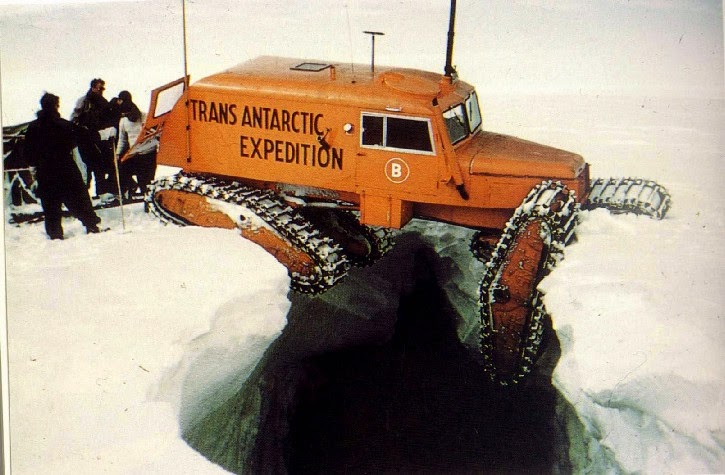 Yep, there ya go..."I FEAR crevasses".  Not the little ones, mind you that anyone spending time on a glacier commonly sees or better yet never sees as you whizz by on skis.

The ones I really fear are generally seen late in the season on the Kahiltna or the Valle Blanc as the snow cover dimishes and the ground opens open up around them.   Those crevasses I fear.   The ones you zip over and realize @ the last second you are on a snow bridge that will sooner or later completely collapse into a bottomless, dark hole.   The kind of crevasses that can eat planes, trains and automobiles.  A person dropping in would hardly require a burp!

So fear?   Good thing?  Bad thing?   Actually it is both.  Fear should keep you out of stupid and dangerous situations.  But then skiing glaciers, climbing vertical rock or climbing frozen water falls isn't  going to be on any genius' list of "safe" things to do is it?

It occurs to me that no matter what you do for fun, fear still permeates our lives for better or worse.  And I suspect most of the time it is for the worse.  Not like skiing into a crevasse, climbing a crumbling water fall or decking on a rock climb won't kill you.  They most certainly can.

I recently recognized that it is a slow death we should be more afraid of and aware of,  than the fear of dying on tomorrow's outdoor adventure.   No matter if the death is fast or agonizingly slow.

To borrow a phrase from Colin and Kelly,  "Buy the fooking ticket!"

You may die at home in bed but it is sure to be boring as hell, likely painful and generally take way too long!

Just by keeping up the blog I encourage people to ski on glaciers, and climb ice or rock.   But do you "buy the ticket" often enough?

If Fear does any of that...trust me you aint alone.

Many times I have been stopped on climbs, afraid to dive into a new project (work/home/school/life) because of fear.  A few times it has been reasonable.  More than likely most haven't been.  Doesn't matter if it is finally making that decision to buy the airline ticket or deciding you can actually tackle a new project.

The guys and gals that actually succeed,  no matter how things get started, first and foremost actually show up at the start.  And then just like a slog up any couloir or mountain, take it all in, one silly, small step at a time, till the job is done or you can go no further.  But fear does not make the decision for them.

I aint 18 years old anymore.  Far from it.  And I am still amazed on a regular basis just how much fear can rule my own life.  It could be fear of not having enough money, fear of not having enough to eat (thankfully if you are reading this you likely have enough to eat), fear of loosing or not finding a good job.  Hell, just the fear of getting in the car and going some where else can be enough to paralyze anyone.  Sometimes it doesn't take much to have fear ruling your behavior.

I've taught myself to launch up a new route or into hard climbing or to drop into a steep gully and ignore the fear.  BTDT.  Not too many surprises.  But the decisions in the mountains are often pretty simple.  The mistakes are generally obvious and feed back quick.  The  results can be terminal.  Our lives in general just don't move that fast.  30 days before the rent and the credit cards are due again.  You have time to spare, right?   The good snow or ice conditions might be gone in 24 hrs!

Fear of not being able to accomplish something you really want to do?  It happens a lot I suspect.  Some times for good reason.  More likely than not it is just fear of the unknown.  Pays to look at the thought process behind your own fears.

For me?  I would rather die in bed honestly if it has to be slow.  I do fear cold and deep crevasses!  And I think about that every turn when I ski on glaciers!

I wonder if that is what keeps me from "buying the fooking ticket" ?"

Excellent post! I've taken up many dangerous new hobbies as I've slowly lurched into middle age. Ice climbing, downhill mountain biking, sky diving. Fear has held me back, especially when it comes to hucking my DH bike off an 8 foot drop. But I tell myself, if I die, I die doing something I love, something that makes me feel ALIVE, on MY terms. Not the terms of an illness or old age.

Thanks Sam. Not a big fan of the "died doing what he loved" quote. Reminds me of too many who just died doing something really stupid when they should have known better. I get the "my terms" thing. But I don't expect to die "loving it".

Dane - I'd agree on died doing something utterly stupid, although they loved it. And in the activities you do, I think that people do more things against their better judgment. What I'm referring to in my experience is fear holding me back, even though I KNOW I have the skill to do it, but fear of equipment failure, fear of something happening out of my control. I've told this to my wife, more or less to maybe try and explain why I do dangerous things.