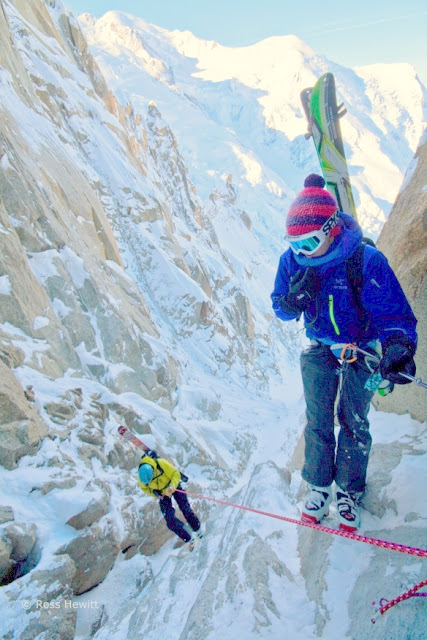 "The abseil off the Aiguille Du Midi Bridge into the Cunningham Couloir"
Nice Toque there Dave!

I’m not really a huge fan of waterproofs for climbing being as most of the time I don’t climb in the rain.  As Mark Twight eloquently put it in Extreme Alpinism “if its raining in the mountains, you should just go home”.   I agree.  However summer alpinism isn’t that predictable and more times than I can count I have had a good drenching on the walk out.

When I first laid my hands on the Alpha FL I knew it was going to be a winner and is probably going to accompany me on lots of my alpine adventures.   I have been using it for a few months now ski touring and steep skiing and it’s worked really well.  It really is no frills. No pit zips, only one generous chest pocket, no wired hood and even the zip pulls are just  bit of coloured dental floss!  It doesn’t even have a zip gutter on the main zip because the zip itself is waterproof enough.  I was a bit worried that the zip might not stand up to serious windy wet weather but to be honest I don’t really care.  Wind is one thing and rain is another but together and you wouldn’t see me leaving the house for much more than a dash to the shops.  If, however, I was climbing in Scotland and I knew it was going to be grim (which it normally is) then I might pack something a bit more bombproof but that’s not what this jacket is trying to achieve.  Even then I still think I would grab the Alpha FL because it has a good balance of being burly without all that extra useless stuff….like hand warmer pockets.   Who needs hand warmer pockets when either climbing or belaying? I don’t and I think if you ask yourself then you’ll probably agree you don’t either.  Extra unnecessary weight for sure.  Ueli agrees….. 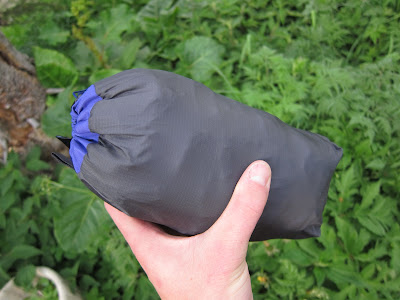 Three layer Goretex in it's own stuff sack.

Active shell is gore’s most breathable fabric and it hasn’t let me down so far.  I’ve yet to reach the point of thinking “I wish I had pit zips” without just whipping it off and shoving it in the tiny stuff sack provided.  The outer fabric on the Alpha Fl seems pretty sturdy to.  Not a mark on it after tree skiing and scrabbling about on granite for a few months, the two things which are guaranteed to end the life of a lightweight waterproof prematurely.

The hood is good and it of course fits over a helmet well and reduces down on a bare head neatly. The chin piece isn’t as high as some other jackets I’ve seen but it still covers enough.  As I said it doesn’t have a wired peak but it is stiff enough for that not to matter.   The arm articulation is great, the sleeves don’t ride up my arms at all and the hem stays put.  Exposed waist and wrists is a common problem I face with jackets due to my disproportionately long arms.

So it’s not the lightest waterproof jacket in the world at 295g but it isn’t that far behind either!  I defy any sub 250g jacket to withstand half of what I have put this jacket through in two months.  A little extra weight can go a long way in durability for sure.  Definite thumbs up from me here.   Oh and purple is the new green I have been informed. J 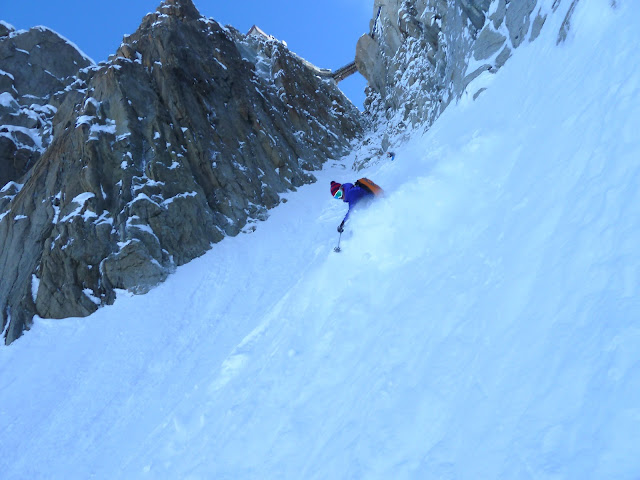 Dave using the Alpha FL in the Cunningham Couloir
Posted by Dane at 3:08 PM

I'll raise you a (no longer made) Haglofs Ozo.

180 grams in M once I cut the pocket off. More durable fabric than shells twice the weight.

I fully agree with Dave. I got an Alpha FL jacket about the middle of last season and have not looked back. From snowboarding to drippy ice climbs and because it packs down and is light there's no reason to leave it behind. btw yellow is the new red!

The main question is, does it breathe well enough and just how durable/abrasion resistant it is? In comparison to, let's say, MHW Quasar pullover, made from DRYQ Elite. There is no similar (ultralight jacket) made from NeoShell at the moment, at least I am not aware of one.

Dersu, I wore mine snowboarding through tight trees and was quite surprised to find it wasn't shredded when I came out the other end. Also it seems to breathe better than my Gamma MX

I'll second Fulton on that. Takes the abuse. Removes the inner yuk. yellow was the new red and purple is the new yellow. ;-)