I was first drawn to mountaineering by skiing.  Some of the most fun I had early on in the mountains was skiing in the late spring or summer.  Or better yet out of bounds in the local ski areas.  Grand adventures as a kid.

Chamonix has a long history of off piste skiing.  For us amerikans that is out of bounds or off trail (here there are no "out of bounds").  But you had better take your own safety seriously skiing here.

A very experienced guide skied into a crevasse and died here the second day I was in Chamonix.  That while guiding clients.  I nearly lost two friends in front of my eys our first day here after they took a 1500 foot tumble in a slab avalanche.  Literally a 10 minute walk from the lift.   Skiing is serious sheet here....even on the "normal runs".     If you want something more fun, buckle up, 'cuz it is available  here and people do it every day.  And people die.


10 minute walk off the lift.  And the small ice slope my two buddies were wondering up during a bit of wind. 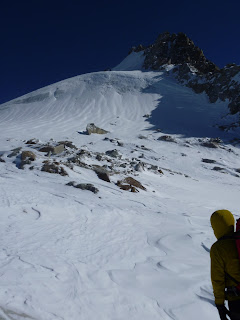 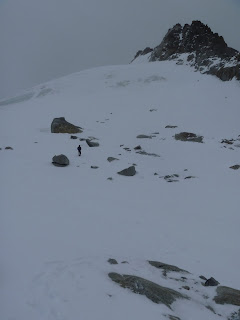 Our chasened heros looking for loss gear above their run out point.  The 4' crown and slab above them on the left.
The 1500' run out and where they were buried.  Cost?  3 new Nomics, a sprained thumb and a crampon point in the calf.  Lesson?  Priceless. 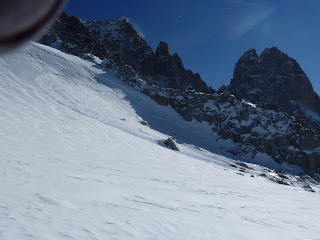 And the signs we ducked under for our little hike that day.
Mind you these are posted where you put your skis on after walking down the stairs from the lift station ;) 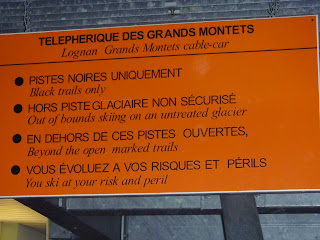 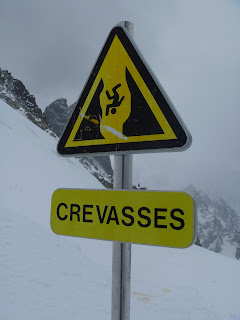 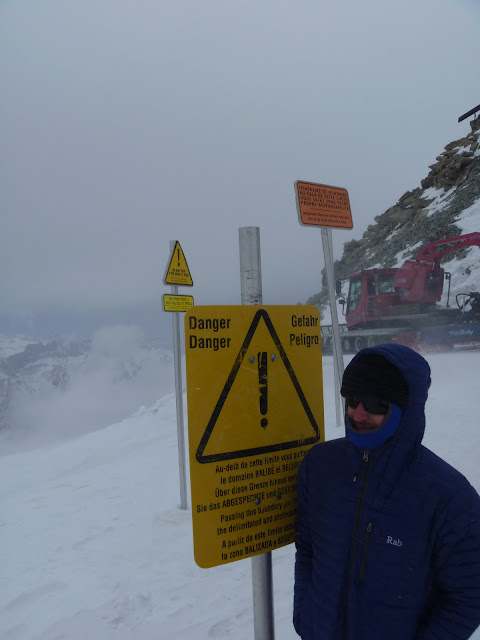 I admit to having become bored and jaded skiing in the NW.  I finally stopped skiing altogether almost 10 years ago.  3 consecutive unused season passes told me it was time.  That after years working in ski areas and guiding all sorts of ski trips in the winter.   I never thought I'd ever stop skiiing.  For this trip I knew I'd be skiing again and just thought..."well I'll get by".  Might even be fun.  Either way I knew it was mandatory if I wanted to get around here in winter and climb.

And I have gotten by for the most part.  The "big" or at least well known ski runs that I wanted to do while I was here are generally all on beginner terrain.  Beginner skier terrain at home as far as the skiing goes.  But you had better beware of the actual terrain objective dangers or you might well be swallowed up...whole....and never seen again.  No shit.

I have a buddy who snow boards these big routes (same one buried on day one) with almost no technical knowledge of glacier travel, snow conditions or avalanche danger even after years of boarding.  His idea of avoiding the objective dangers here?  "NEVER STOP" and that on the the  6 to 12 mile runs here!  He is still under a dozen runs on the Mer de Glace...so I am sending him a a basic avalance-glacier travel book :)   Be nice if he could at least stop for lunch at the hut.

This is a little photo essay for some of the best (if not the best) lift served skiing in the world.  Certainly nothing like it in NA.

The first lift we used was the Grand Montet up at the east end of the valley.  Lift tops out at 3275m.
Point of vue and the run down the Tram line are spectacular. 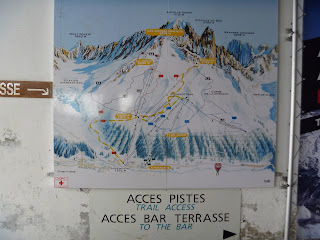 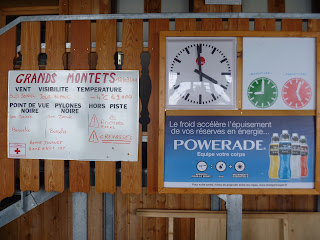 Yes that is the North face of Le Droites in th back ground. 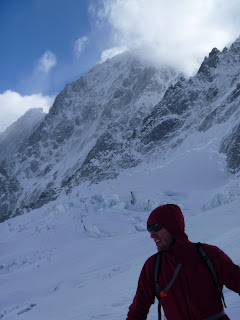 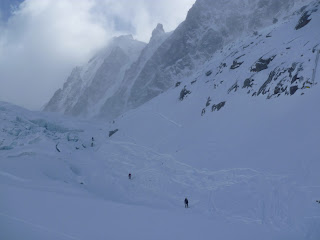 Out of the Midi maze of tunnels and the entry way to the Vallee Blanche. 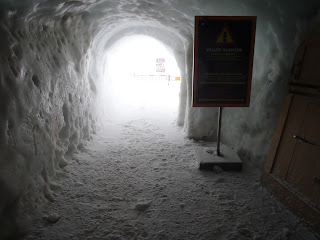 The run off the Aiguille Du Midi cable car and down the Vallee Blanche is even better.
Skiing and vistas incredible. 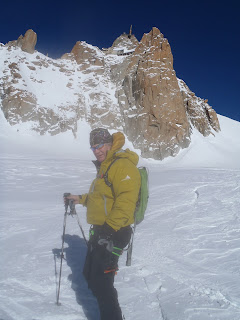 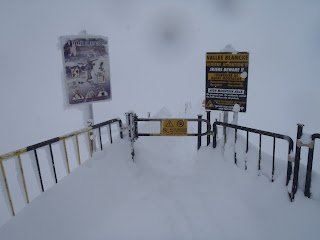 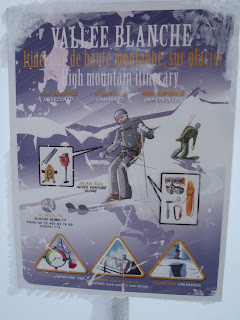 Signs to take seriously and understand what they are asking. 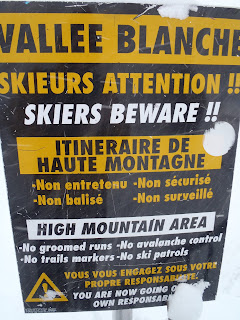 For some the trail down from the Midi to where most put on their skis is a whole new experience.
First time I did it in fall of '78 I wanted crampons where 10 years olds were in sneakers.  And I still prefer doing it in crampons. 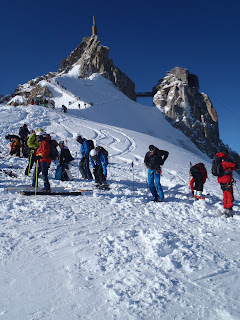 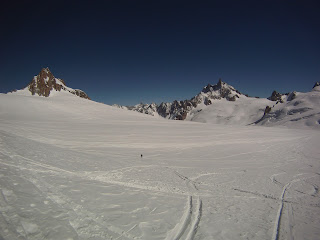 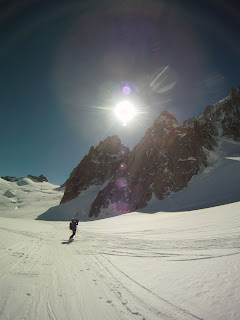 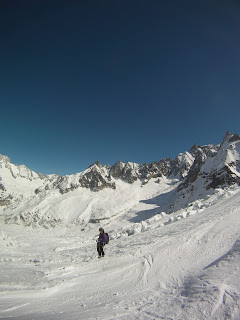 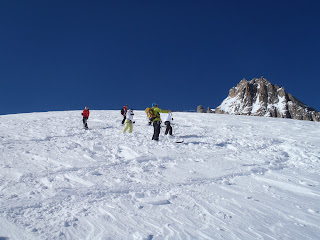 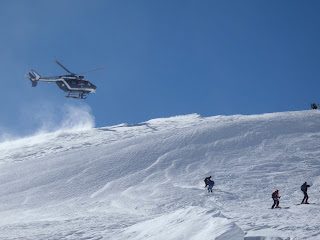 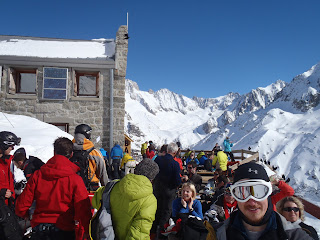 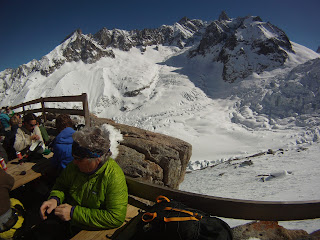 A 9 Euro lunch and likely the best deal I have found in Chamonix. 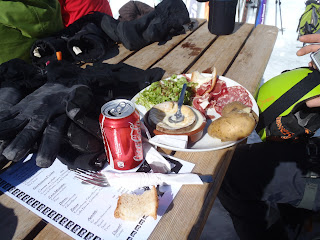 The short bit just before lunch.
You need to dbl click the photos to appreciate the scale here. 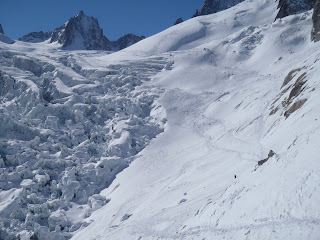 Wait, more details please! Where was the slide? Near the Montets or the Midi? Were your friends hiking or skiing? And was there anything like a cornice fracturing to set off the ride? Glad everybody made it our safely. I understand its been a difficult year in Chamonix, with strange conditions and several notable accidents. I was there two weeks ago: on the Cosmiques it was absolutely perfect, with nobody else around, and it felt like we were somehow cheating or stealing to be on such a classic route with such great conditions and solitude. Then, on another route, we turned around about 1/3 of the way through, because of deep, unconsolidated snow, and fragile cornices. That's climbing, I guess. All the best from Switzerland.