"Sure, no problem." was the answer.

The other two climbers were very squared away, the terrain likely terrible for such antics. I was the obvious weak link.

"Carlos will be fun." I say offering little enthusiasm.

I'm thinking, may be Daniel is just humoring me.

Daniels is in his mid 20's. I am not totally shocked he doesn't recognise Carlos by simply..."Carlos". But a little disappointed as well. Just reminds me of how old I am. I climbed with a good climber a season or two back that had no clue who John Roskelly was. John and his 20 something year old son, Jesse, had just done Slipstream.......and that a few years after doing Everest together. I thought both were notable achievements and figured my new young friend might have recognised the name. He didn't. The WA climbing community use to be a lot smaller. My blatant name dropping and pathetic attempt at male bonding was failing fast. But I am digressing here.

"Do you know who Carlos...Carlos Buhler is?"

As least Daniel was gracious enough to not say, "should I?"

It is a weak flex and I know it. But the name dropping is going better this time around.

I chuckle to myself.... We'd met even earlier, in the last century actually. Before Carlos, at 27, had been part of an American team to put up a new route on Everest. More importantly he had been one of the few on the team who actually made the summit. And he was just getting started in the Greater Ranges. Not a lot of challenge left in our local play grounds by '83 for him.

"Before you get in the car, Google, Carlos Buhler", I say.

(for the readers if you don't know who Roskelly is, Google him as well. I don't want to embarrass myself again ;-)

Be sure to dbl click the photos for full effect. 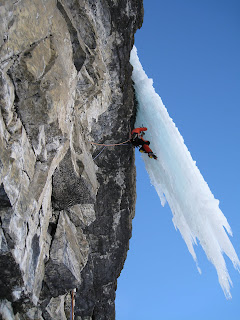 I don't know if getting a heli ride from the top of Snowdome because you're late = climbing Slipstream. They got fucking owned up there, mostly because they underestimated the route.

Grant you can be such a punter.
Seasonal Canadian Parks Service "host" isn't it? For a relative beginner in our sport we both know you have a mouth that you can't back up with experience. You haven't done Slipstream for starters. Us that have, and know John, might give him some shit to his face, in jest for the quick decent, but at least we know the effort involved.

Just love it when you diss guys like Will Gadd, Barry Blanchard, and Roskelly in public. I am always impressed with your sage observations that are generally fubar.

John was what...61.. when he climbed Slipstream with his son? And putting up true Canadian Grade VI water ice before your sorry life was even someone's sexual fanatsy. You'll be lucky to live that long. Either way you have missed the point..several of them in fact.

John needs no defense. And I doubt he has ever been "owned" in the mtns.

And a tiny bit of John's climbing in the last 50 years:

As a graduate from Huxley College at Western Washington U it was sure cool to be spacing out in a meeting with an advisor and all of the sudden realize there is a picture of a guy holding a Huxley flag on some mountain. Right off I figured Baker, or one of the usual suspects, but then I realized "Holy shit, the whole horizon is mountains." After I was done meeting it was pretty damn cool to look at the information under the picture and learn he was on the summit of K2.